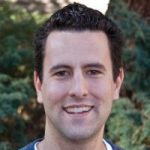 Matthew Middione is a Research Scientist at Stanford University, working from his home in St. George, where he develops and tests new software applications for magnetic resonance imaging (MRI) machines. Prior to working at Stanford, he also worked at GE Healthcare for 4 years as a Scientist in the same field.

Matthew grew up in Fresno, California where he earned a B.S. in Biomedical Physics from California State University, Fresno. He later moved to Los Angeles and obtained a M.S. and Ph.D. in Biomedical Physics from University of California, Los Angeles. Following his graduate studies he moved to San Jose, CA to start his career at GE. He relocated to the St. George in 2017 to be closer to his family. He is the proud father of two sons and an uncle to his one niece (hopefully all future Vista students). He and his wife are thoroughly enjoying their transition to Southern Utah and are happy to be closer to family (and out of California)!

In his free time Matthew enjoys working around the house, spending time with family, working on cars, watching sports and enjoying the beautiful St. George outdoors. He enjoys working with the teachers and staff at Vista. He feels the passion, fun and energy that surrounds Vista and it is something the entire Vista community should be very proud of!